Stick Figure In a Dexcom, 1 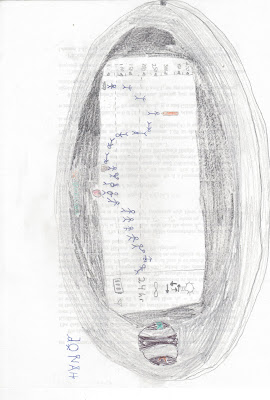 P.S. Click on it to see a bigger picture, and then you'll still have to look sideways.
Posted by Jonah at 8:34 PM 0 comments

The good news is, the prolactin and calcium are normal now. The vitamin D is low but I refuse to supplement- not when I've had two unexplained high vitamin D levels. My endo says if it was him, he'd try supplementing with the a low dose of vitamin D but I'm not willing to do even that.

My A1c is up to 7.0% which I am not at all happy about even though I'm not surprised. I know in studies on people with diabetes, people often have drops in A1c when something new is added or something is changed- whether it's a pump being added or an insulin changed- and that most of the time, the A1cs go back to what they were after a year or so. I assume that this is because of how much diabetes control is affected by the thought and effort that goes into it, and changing things up both causes us to think more about what we're doing, and motivates us to do what we know we ought to.

Nonetheless, when I got my lowest ever recorded A1cs so soon after starting on the Dexcom, I really thought I would be able to keep those A1cs down. So it's especially disappointing to me to see them go up.
Nonetheless, there are times that the Dexcom really helps. For example, today I didn't measure carbs. I just took a lot of insulin and then ate more when I started getting low. My daytime highest number was 178 (I went over 200 around 11 PM), and I took about 50 units of Novolog today- which at a 1:10 ratio suggests I ate an awful lot of carbohydrates. I'm not really sure what my ratio really is though- I've been sick for three weeks and I've been insulin resistant.

Anyways. Maybe the Regular will help. It's certainly cheaper than the Dex.

Tomorrow I'm going to post a diabetes cartoon I drew. I've been meaning to scan it and upload it for a while but now that I've said I will, I'll have to.
Posted by Jonah at 10:54 PM 1 comments

I went to see my endo because my other doctor thought I should see a specialist. I spent awhile getting stuff together for the visit but somehow I don't feel like it went well because I don't think we really communicated. My endo doesn't know of anything that would cause the blood abnormalities I had and is inclined to dismiss them as a non-issue. I am not similarly inclined. Anyways, I had a blood draw. I'll have an A1c soon, among other things.
And I got my diabetes prescriptions:

and that's it because I got a Novolog prescription earlier when I was running out, and I have a stockpile of lancets.
Posted by Jonah at 2:53 PM 1 comments

My last sensor I pulled after an ERR 1 episode.

This sensor performed very well for one week, so of course I tried to restart it. I waited through the two hour warm up period, entered in a bg (196) and it said ERR 1. I entered a second bg anyway (224). Err 1. I waited an hour and a half and entered another bg (117). ERR 1. I hit end sensor, start new sensor. I waited through the start up, then entered two calibrations (88 and 92). It displayed two readings before going to ERR 1.

According to Dexcom, ERR 1 is a calibration error and the correct response is to wait about an hour and then try giving it a new calibration. In the past, I've had a few ERR 1 episodes and all of them cleared up within a few hours. I wish I knew how to predict what would make it clear up. I don't see why a sensor that's performing perfectly for a week would go ERR 1 on restart.

I put together my high prolactin and high vitamin d (1alpha 25OHD 2) level and I think I have sarcoidosis although the doctor hasn't gotten back to me yet.

I'm sick and took the day off of work today, partly because I don't feel good, partly because I might get somebody else sick, and mostly because I sound so awful that I'm sure everybody would blame me if they did get sick. I've been having a hard time getting out full sentences without either speaking in a mickey mouse voice or else not being able to make any sound at all, and at best I sound hoarse. My experience with gender dysphoria makes me feel pretty tolerant of the times when my voice is wonky, but not necessarily tolerant with the times when my voice won't come out at all.
Posted by Jonah at 3:25 PM 2 comments

My newest weird test result is a high vitamin D level- 92 point something at a lab that goes up to 75. And I'm not even supplementing! The doctor left a message but it's too late to get back to her today.

I finally have insurance coverage for my Dexcom sensors, which is great. I got sent an invoice about a week ago that at first I thought was amusing, but the more I look at it, the less amused I am.

To review: if you are buying Dexcom sensors, you will be told the price for a box is 319 dollars per box, unless you are willing to buy at least six boxes in a twelve month period, in which case the price is 289 dollars per box.

On this invoice, it says that the list price is 460 dollars per box, but that my insurance (BCBS-IL) has contracted with Dexcom and received the lower price of $261.52 per box, and that for the two boxes I just got, the price is therefore $523.04 of which I paid $52.30 and insurance is expected to make up the difference.

And, just, I don't get it. Why does Dexcom have a list price of $460? Why contract with my insurance for $261.52 when uninsured patients, who require less paperwork and processing (though probably use the Dexcom less continuously) pay 289 plus shipping and handling?
Posted by Jonah at 7:27 PM 1 comments

On Thursday I walked about ten miles. Took a water bottle, was good with hydration, nary a high blood sugar all day (it did bump up to about 160). I didn't eat much, but... whatever. I got home and tested for urine ketones because they've tended to be running trace a lot of the time in the past nine months or so. The color changed really quickly to moderate, I put the strip down, picked it back up and it was the color of very large ketones. Whoa! So, I took out the Nova Max meter and tested blood ketones and got a result of 0.4, which is the upper end of normal, and is supposed to correspond with negative or maybe trace ketones.
So... if I were to just test blood ketones, I think I'd find normal, normal, normal, ketone levels. But on urine ketone levels, I've seen trace to small ketones the majority of the times I've tested in the past year.
While a negative blood ketone test is somewhat reassuring, the fact of the matter is that even moderate urine ketone levels strongly imply that something is going on. The fact that I developed a high urine ketone load while hydrated and euglycemic (unless you think 160 is ketogenic) makes me wonder if either exercise or lack of calories could be responsible and if it is safe for me to eat small breakfasts and lunches.

I also wonder if the blood ketone meter's demarcation of normal is correct, since I've read other people claiming that they typically have lower blood ketone levels and don't see numbers like 0.4 unless they are sick.

I pulled that second hip sensor when it missed a low, I tried calibrating with the low (bg of 62 vs sg 140 or something like that) and it said Error 1 and didn't recover. I now have a sensor in my arm and it is working beautifully.
Posted by Jonah at 6:04 PM 2 comments

Let's say you're wearing (or a person in your charge is wearing) a sensor and it's not performing well. How do you decide to pull it or leave it in?

I'm wearing a sensor. It's on day 5. It has been showing some really erratic numbers. A few times it's been spot on and mostly the direction of the trends are correct but the magnitude of the trend is not. Also, every time I take a walk it shows me plunging low within 20 minutes, very dramatically proving that it is on body, but in reality my blood sugar doesn't seem to have been low at all. At first I thought it was just warming up and would get better but at this point I'm not so sure.
Posted by Jonah at 1:11 AM 1 comments