Meter Comparison and what Hypo feels like to me

I ordered a free Ascencia Contour meter about two weeks ago. It came about a week ago, with ten test strips and a pricker. I've been using the pricker a lot because I like it. I used it the morning after I got it, and got a 146 morning reading, which I thought was probable and didn't double check with another meter.
That evening, because my brother likes to test his blood sugar, and I prefer not to use strips that the insurance bought on my brothers, I let my brother use the meter. He is not a diabetic. His blood sugar on the meter was 61. He had eaten a very large, carb laden meal three to four hours earlier, meaning that his liver shouldn't have been low on sugar, and his blood sugar shouldn't have been that low. I assumed that the meter wasn't so hot.
For the purposes of this post, I got my new Ascencia Contour meter and my usual Accu-Chek aviva meter out. I put a test strip in the contour, a test strip in the aviva. I put a new lancet in the Ascencia Microlet, and turned the dial to the second smallest drop, cocked it, pressed it to my big toe and fired. Nothing. Cocked and fired, blood.
I put the blood first to the contour meter, which counts down from 5, and then on the Accu Check, which displays an hourglass.
The Contour said 38.
See, it runs low, says I, I don't feel funny.
I wait, three seconds later the Aviva's result shows up. 38.
Oops, I reach for the juice box. I don't see the straw, use the Microlet to make a hole and suck half the juice box (I don't FEEL low) and then type up this post.


On a side note: two posts ago, Major Bedhead commented that I was pretty coherent for 38. Other diabetics have told me or have written that they know when they're hypo. They see if they can say the ABCs backwards, they see if they can count backwards. They try walking.
I have no such luck
Once when I was sitting in the snow with a blood sugar that had been in the low 30s for about half an hour by my meter, I counted to 200 backwards and forwards a few times, then retested my blood sugar at 42. Then I got up and walked a half mile to a convenience store because I was low on hypo snacks.
When I'm hypo, I sometimes get a little unsteady as I walk, but not real bad. Sometimes the edges of my vision seem a little dark, and focusing can get difficult, but I have vision problems that are similar to that whenever I'm low on sleep, which is frequently.
I sometimes slur my words if I speak when hypo, the way I do when I'm tired, but I can still type just fine.
If I'm around my family when I go hypo, I get cranky. Otherwise, I sometimes feel sad- if I start crying, I know to test my blood sugar. I'm thankful that I've never gotten violent while hypo.
Sometimes I get sweaty or my hands shake when I'm hypo, but usually it's a mild thing- I have to relax to see if my hands will shake.
Sometimes I get anxious when I'm hypo. If I wake up anxious AND I don't remember what I dreamt, then I'm probably hypo.
Just now at 38, my hands were shaking if I took them off of the keyboard and held them loosely, I am calm, not at all anxious or scared, with a normal pulse. My vision was a little dark around the edges, but not really noticably so. I'm slightly dizzy, but I've been dizzy for the past week or so. My coordination is fine. I'd been thinking about what I was going to write about the Contour, and the possibility that my brother is in the reactive hypoglycemic state of prediabetes. I walked into the other room to get the Contour without any shakiness or difficulty in walking to and fro.
The 38 is the second hypo of the day; I was at 59 when I left work.
Posted by Jonah at 5:58 PM 3 comments

Friday morning, I cleaned off my stomach with soap and water, dried it carefully. Not sure that the soap was all off, rinsed and dried, rinsed and dried. Lay on the floor, showed my mother what I wanted done. Had a lot of difficulty relaxing because my stomach is the most sensitive part of my body. My mother inserted the I-PORT and it hurt a lot. I injected the Lantus and breakfast Novolog. The site hurt and hurt and hurt. My mother and I went shopping and my site hurt and hurt and hurt. After about four hours, it stopped hurting.
On Saturday, I couldn't really feel the port. When I injected my Novolog and Lantus in the morning, it kinda hurt, but shots during the day didn't. I played frisbee, ran around, had highs and lows, and it was a good day.
I stayed up all night of saturday into sunday, and I did about four injections overnight and they were fine.
Sunday, the breakfast Novolog shot hurt, and I injected the Lantus in my usual spot instead of into the port. Sunday at lunch, the Novolog shot hurt. Not the insertion of the needle- that was fine. It was pressing down to inject the Novolog, after the needle was inserted, that was agonizing. So I removed the Port after lunch.
The area was red, and the actual part that the cannula came out of was bruised and bled. The bruise was swollen. It still is. The cannula came out straight.
Next week I'm gonna try a spot that's not my tummy.
Posted by Jonah at 9:21 PM 1 comments

Email ThisBlogThis!Share to TwitterShare to FacebookShare to Pinterest
Labels: iport

My Father Helps Out

I was a college sophomore, 17 years old, and semi independent when I was diagnosed with diabetes. For those reasons, my parents have not been very involved in my care. My father in particular has taken a very back seat position in my care. He injected me four or five times, the last time in December or January, when he got so scared that his hands shook and tore a scratch looking line in my skin. When I ask him to help me out with a pinch for a shot, he closes his eyes so he won't have to see the needle. Because my mother is an M.D., my father has generally referred us to my mother for anything medical. I'm not the doctor in the family, he'd say. And that was fine, as long as medical needs were not a large part of my life. Now it's not so fine. I want to know that my father can keep me safe, and he can't do that if he can't face my diabetes.

Today my blood sugar went to 38. I knew that I had a fair amount of insulin still on board, and that I was going to need my blood sugar checked in about twenty minutes, and I decided that I wanted my father to learn and to help me out. After treating the hypo, I washed my hands, got my meter, test strips, and pricker. I went into the living room, laid on the floor, and told my father that in a while I was gonna ask him to check my blood sugar. And that's what I did. At 3:51, my father tried, for the first time, to check my blood sugar. It was a comedy of errors.
First he needed to turn on the meter. Now, with my meter there's a lag of about two seconds between pushing the power button, so if you keep pressing the button when you don't see the screen turn on, it goes on off on off on off and you never see the screen go on. Anyways, my father eventually got the meter on.
Then he wanted to know if he was getting a low battery signal; that was a flashing test strip.
Then, luckily before pricking my finger, my mother (who was watching) informed us that my father had the test strip in backwards and upside down!
My father got the pricker cocked no problem. Then I told him to press the button up against my finger. What button? says my father. We spend a minute on locating the button.
Alright, without further ado, a finger prick! On the wrong part of my finger. And is there any blood? I squeeze and get some blood, my father tries to apply it to the top of the test strip.
I prick my own finger, my mother gets the test strip to accept the blood. 58.
That's a questionable hypo, says my father, looking at the meter. The accu-chek always puts a question mark after the word hypo. I treated again, was at 48 an hour later, didn't involve my parents with that. 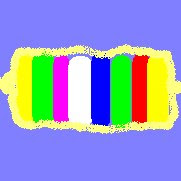 All those hypos wore me out, and I lay down and fell asleep. Three and a half hours later I woke up to my father trying to check my blood sugar. I was thrilled: I had thought he would be discouraged by his earlier attempt. My bloodsugar at that time was 101. Near perfect, says my father.
Posted by Jonah at 1:13 AM 1 comments

I put on the port too slowly, the tube (what are they called again?) got scrunched. It worked for about a day, hurt. The following morning I tried putting insulin in and my leg got wet wet wet, I put lantus in to see if it would get me a lantus sting and it didn't, so I took off the port. I've got a bruise there now. My mother is going to put my next port on me on Friday, since the plan is to put them on on Fridays and then be able to wear them for the whole weekend to make weekends a little more fun.
I learned that:
the tape itches a lot
it really is fun to inject as I go, course by course, instead of for the whole meal
doing a shot when I've had a day off really sucks. REALLY SUCKS.
I can sleep with a port on
when I eat an entire meal without getting insulin, my blood sugar can go up to 400 (boy was I surprised)
400 didn't even feel high- maybe I routinely go high for an hour after meals
I like wearing my diabetes.

If the next port itches, that might be it for porting. I have sensory integration disorder, and that means that I'm terrible at ignoring itchy stuff.
Posted by Jonah at 4:34 PM 2 comments

Email ThisBlogThis!Share to TwitterShare to FacebookShare to Pinterest
Labels: iport

The IPORT distributor just called. We have to meet a separate deductible on medical equiptment, they say, so this first box is going to cost 75 dollars. After that, boxes will cost $15.60, which they claim is ten percent. I was under the impression that a box was way cheaper than $156. I mean, 156 per month would make the cost of porting full time $1,872. Of course, I'm only planning to port part time, but still!
Posted by Jonah at 10:06 AM 0 comments